Does your Toyota Sienna squeal whenever you turn on the air-conditioning or defrost? The most likely cause of the squeaking and squealing is a worn out serpentine belt. Follow this picture guide to replace the belt.

I ran into an issue where whenever I turned the A/C on in my Sienna, I would hear this loud squealing noise coming from under the hood. It was particularly embarrassing when you would start the car in a parking lot! It turned out that the A/C belt was getting old and brittle, so it wouldn’t grip the pulleys like it should, and instead it would slip now and then causing the squealing noise.

If you purchase something through one of our affiliate links we may earn a commission, at no extra cost to you.

I tried spraying some belt dressing on there, and that helped for several days, but after about a week the squealing came back. I finally decided to replace the belt, and that fixed the problem.

Changing the Serpentine Belt in a Toyota Sienna – Steps:

Alright, that was the summary of the steps, let’s go ahead and get started!

How to Replace the Serpentine Belt

This is the procedure for replacing the simple serpentine belt on a 2003-2009 Toyota Sienna with the V6 3.3L engine. The V6 3.5L serpentine belt is slightly different as seen in the diagram below. The vehicle shown here is a 2006 Sienna. You can check which engine you have by popping the hood and reading off the big bold letters, as shown below.

The 3.3L belt path is much simpler.

These are the serpentine belt part numbers for the different engines:

The first step is to pop the hood and identify where the belt is. It is located on the left side of the engine, attached to the alternator as shown in the next two photos. 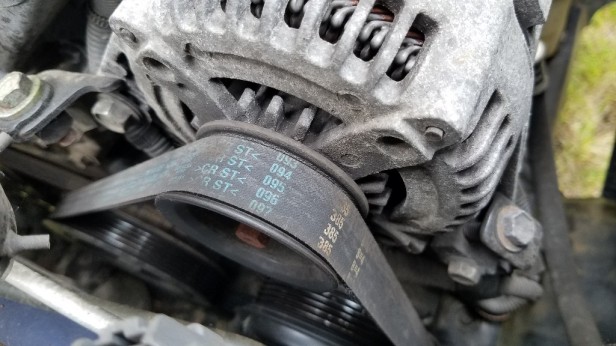 Next, loosen the bottom mounting bolt of the alternator using a 12 mm socket. You don’t need to take the bolt all the way out, just loosen it several turns. 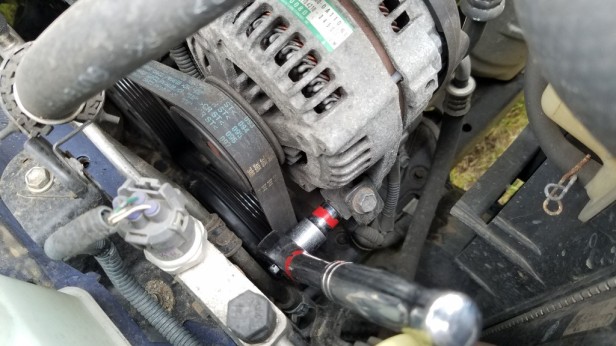 Now loosen the upper mounting bolt on the alternator using a 14mm socket. Again, loosen the bolt several turns, but don’t remove it. 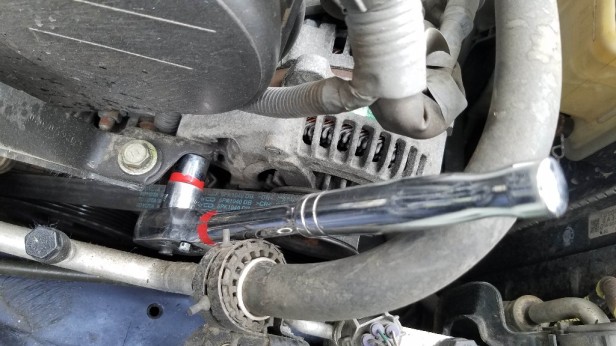 We will now release the tension on the belt by loosening the tensioner bolt. This bolt is 12mm and located as shown below. You will need to loosen this bolt a lot. 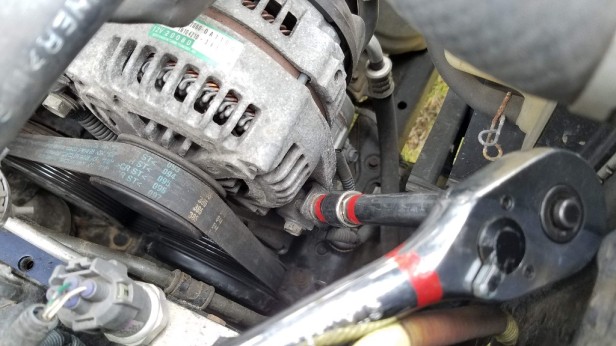 As you can see in the view below, this tensioner bolt simply pushes against a stop to push the alternator upward, and thus tighten the belt.

Continue loosening this bolt (counter-clockwise) until the alternator is low enough to remove the belt. Depending on how much you loosened the alternator mounting bolts, you may need to press down on the alternator to force it down as you loosen the tensioner bolt.

Here the tensioner bolt has been loosened sufficiently for the old belt to be pulled off of the alternator pulley.

Remove the old belt by pulling it completely off of the alternator pulley, and also off of the other 2 pulleys below.

Once the old belt is off the pulleys, snake it out and remove it.

Below is a side-by-side comparison of the v-grooves in the new (left) and old (right) belts.

The next photo helps give you a sense of the length of the belts. 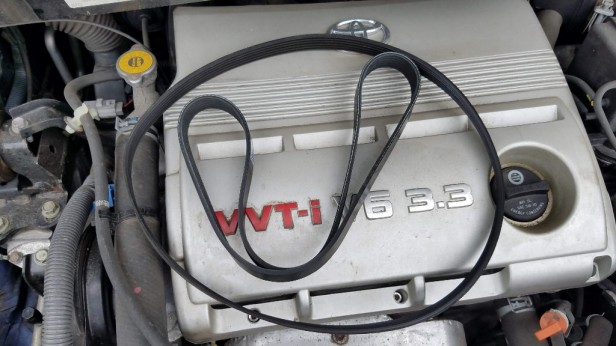 Take the new belt and snake it down into the space where the old belt was.

Get the new belt looped around the 2 lower pulleys first, then stretch it over the alternator pulley. If it is too tight, loosen the tensioner bolt some more. 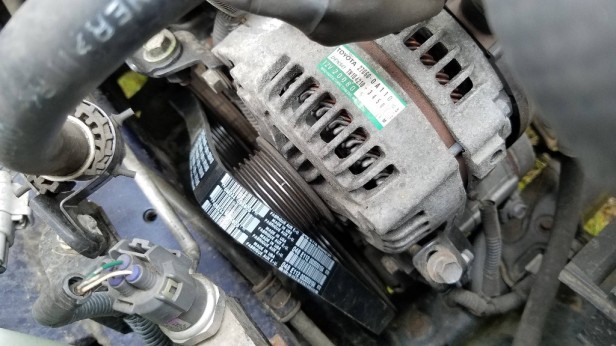 Once the new belt is on, verify that it is seated correctly on all 3 pulleys.

Then begin tightening the tensioner bolt.

Every couple of turns, check the tension on the belt. When you press down on the belt between 2 of the pulleys, it should deflect no more than about 1/2″. If it deflects more than that, continue tightening. 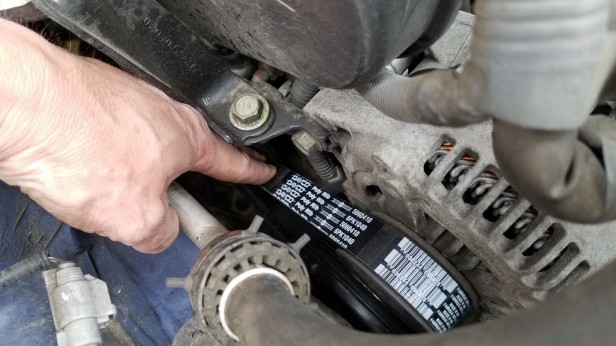 Once you have the correct tightness, stop adjusting the tensioner bolt and re-tighten the lower alternator mounting bolt with the 12mm socket.

Then tighten the upper alternator mounting bolt with the 14mm socket.

Here is a shot of the new belt installed. 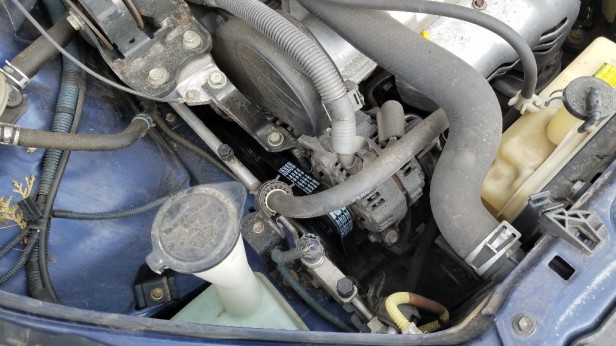 And that’s it, and I hope you found this helpful!

P.S. Check out my additional repair articles on Toyota Siennas.

One thought on “How to Change the Serpentine Belt – Toyota Sienna”

PracticalMechanic.com - A resource site for maintaining cars, homes and hobbies; striving to be as helpful as possible. Thank you so much for visiting!