Quick and easy picture guide on how to pop the hood on a Toyota Corolla!

The Corolla has 2 latches that must be released in order for the hood to open.

The first latch is located under the steering wheel, on the left side as you are sitting in the driver’s seat. It has a small icon showing a vehicle with its hood raised.

Pull this latch outward until you hear the hood pop open.

The hood will pop up about an inch or so.

Now go to the front of the car and lift up the hood. You will need to reach your hand inside the crack and feel around for the latch. The latch you are looking for is shown below on the right side (in this photo, the hood is already open). You want to press upward on the latch, so that it will release the hook from the hood. While pressing upward on this latch, lift up on the hood with your other hand.

Once the hood is release, lift it all the way up. 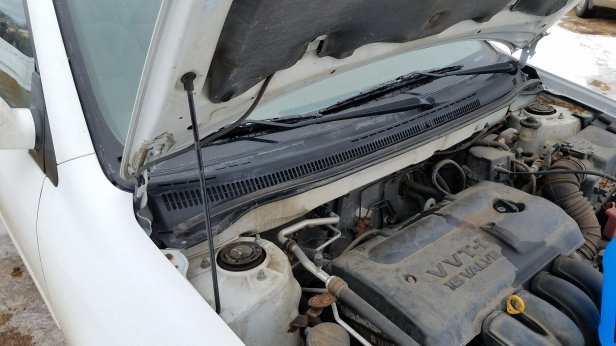 And that’s it! Thanks for reading and good luck!

Having trouble getting your hood to latch? Check out this post on dealing with a hood that won’t stay latched…

One thought on “How to Open a Corolla Hood”