This picture guide goes through the steps I take to boil the sap for making maple syrup. This is the second step in the process of making maple syrup, after collecting the sap, but before the final finishing boil.

Note: PracticalMechanic.com is reader-supported. When you buy through links on our site, we may earn an affiliate commission – at no cost to you. Thank you for your support!

This is part 2 of a 3 part series on how to make your own maple syrup. These are the links to the other articles in this series:

I use a turkey fryer to boil sap in for these reasons.

How to Boil Maple Sap for Syrup – Step by Step

The following steps are the easiest way to boil maple sap to make your own maple syrup! You will end up with some really, really tasty maple syrup, and as you go along and gain experience, you may decide you want to tweak the process to your liking. For answers to some of the more common questions about harvesting and boiling maple sap, check out our most common Frequently Asked Questions!

Set up your turkey fryer in a safe place where it won’t start surrounding brush on fire. (See my list of 5 Reasons to Use a Turkey Fryer for Making Maple Syrup!)

Step 2: Fill the Pot With 5 Gallons of Sap

Pour 5 gallons of sap into your boiling pot and start the fryer. I often like to start boiling with 2-3 gallons of sap, and once the boiling has started, add a gallon about every hour or so.

In order to increase the surface area of the sap being boiled and therefore increase the rate of evaporation, some people use a cooking pan.

Set it at a medium heat and wait for it to start boiling. Once the sap starts to boil, you may need to adjust the heat slightly so that it keeps a nice rolling boil. If it is too hot, it will start to boil over. If it is too low, you won’t see bubbles coming up.

Here, the sap has been boiling for about 1 hour. 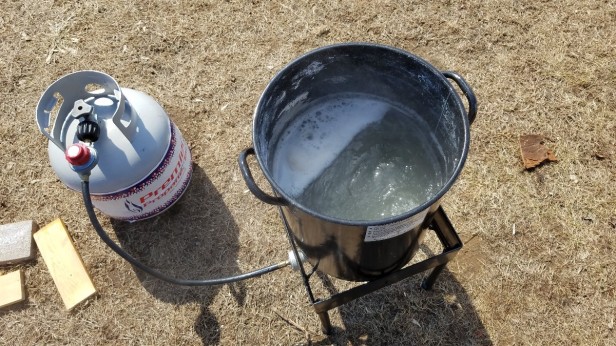 Continue to boil down the sap until you have about 1.5″ to 2″ of sap in the bottom of your kettle. This will take about 4-5 hours. This will get your sap to about the 10:1 ratio.

Step 4: Finish the Boiling on a Stove

Finish boiling the sap to the final sugar content on an indoor stove – for more control.

In the following picture, the sap is nearly done boiling outside, notice the rich dark color of the sap. Soon, we will turn off the burning and bring the sap inside for the final boiling. 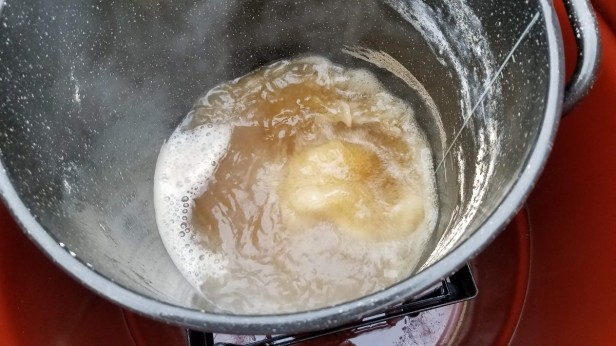 I recommend doing the ‘finishing boil‘ on the stove inside your house so that you can keep a closer eye on it as well as to monitor the temperature more closely.

A complete description of the finishing boil is given in the next article.

Click here for our most Frequently Asked Questions regarding boiling maple syrup!

Check out the rest of the articles in this series on How to Make Maple Syrup at Home!

Making Maple Syrup – Part 3 – How to Perfect the Finishing Boil