This article provides a solution for the problem where your car won’t start; it won’t even turn over. You may hear only a click, buzzing or humming type of electrical sound coming from the ignition starter switch. If you try it repeatedly, the car eventually starts. This is a fairly common problem with Honda vehicles and will get progressively worse until it won’t start at all.

The Honda vehicles that can suffer from this problem include:

The year vehicles that seem to suffer from this the most range from about 2003-2008.

When you buy through links on our site, we may earn an affiliate commission – at no cost to you.

Do you have an issue where the key won’t even turn? You may have a faulty ignition cylinder, check out this post for that fix!

The main symptom of this problem is that the vehicle will make a clicking noise, but not start. You may also hear an electrical sort of ‘buzz’ or ‘humming’ sound coming from near the ignition key area.

Often this problem will be intermittent and then get progressively worse over time. People with this problem describe it starting out slowly, maybe having the problem only once a month or so to begin with. The vehicle will usually start after trying again in several minutes.

Note that this problem is different than a dead or dying battery, in which the vehicle will initially start to turn over, but get slower and slower, and eventually just chatter or click.

What is Going on?

Why has my starter switch failed? The reason for this, is that within this switch, the full starter solenoid current runs through this switch, that is a lot of current. Over time, the contacts in this switch can eventually become pitted around the edges causing bumps and valleys, and the resistance increases due to the poor connection. By trying it several times, the current may be able to make the jump, but it will only get worse and worse eventually requiring replacement.

One way to avoid this is to turn the key more quickly. Do not turn the key slowly so that the current gets concentrated at the edges of the contact points. This is a minor point, and the real answer is that the full current ideally should not be running through this switch!

Q: How to Fix a Honda that Won’t Start? A: Replace the Ignition Switch!

The following is a step by step procedure for replacing the starter switch in a Honda. 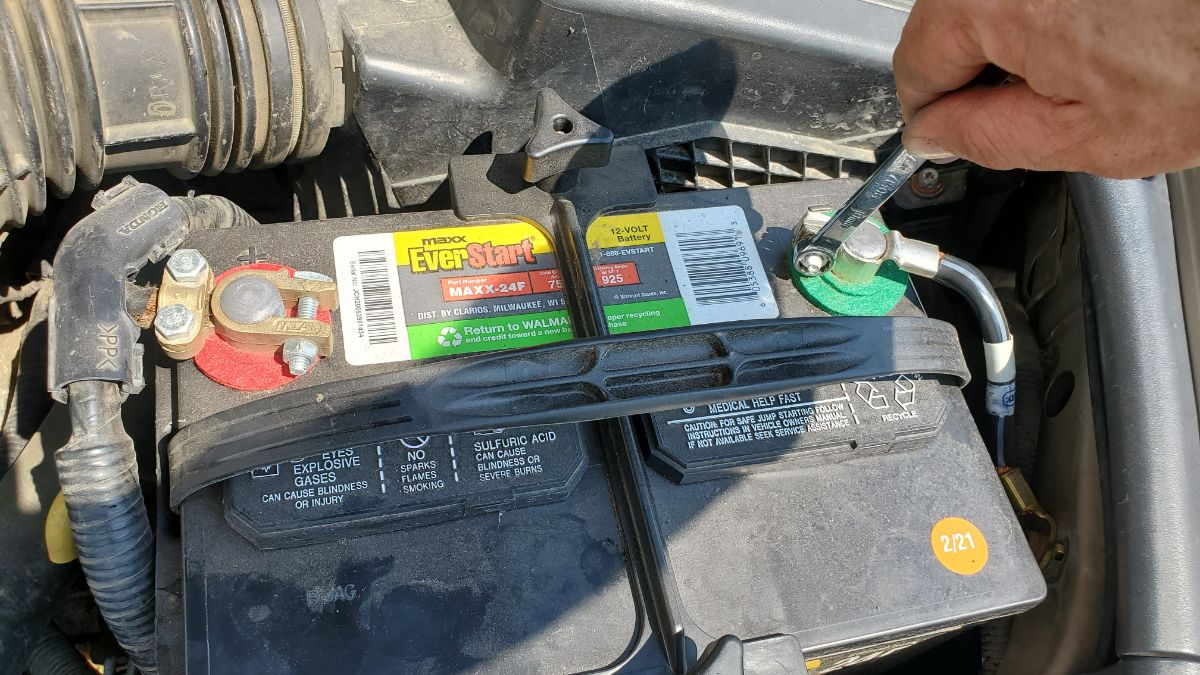 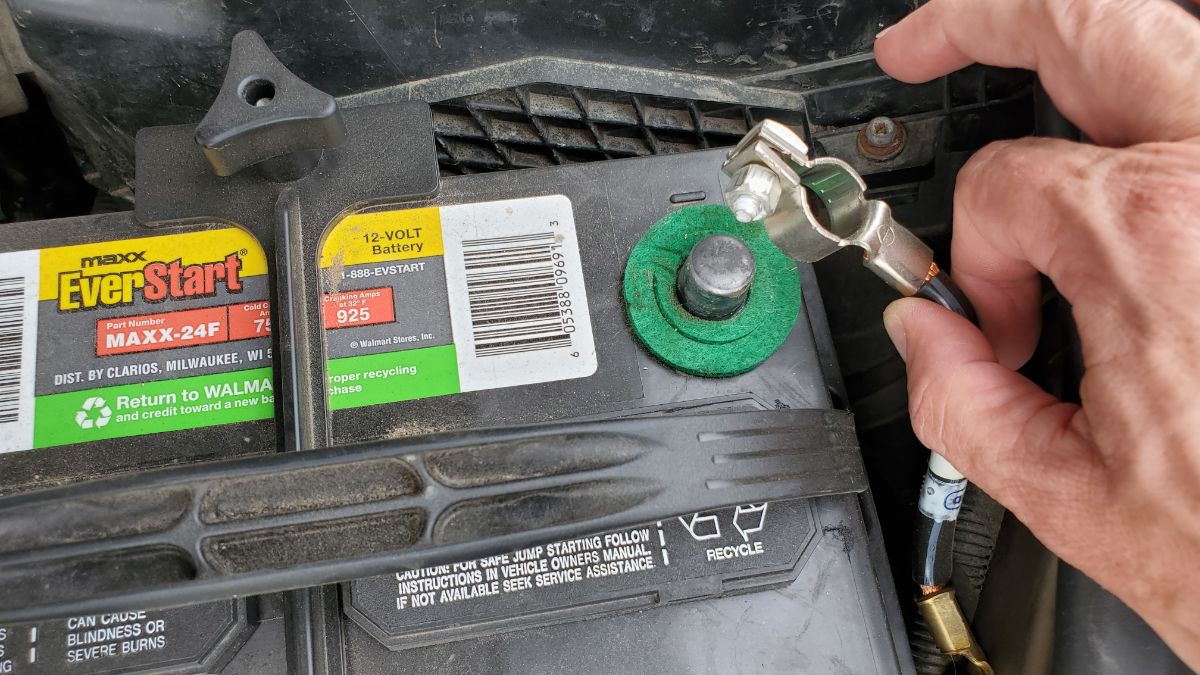 Tuck the cable off to the side of the battery.

Next, go inside the car and remove the steering column cover by removing three screws from the bottom. Some of the screws may be hidden behind the steering wheel angle adjustment lever. Then pry the top and bottom plastic cover pieces apart with a flat-bladed screwdriver and remove them, exposing the starter switch. 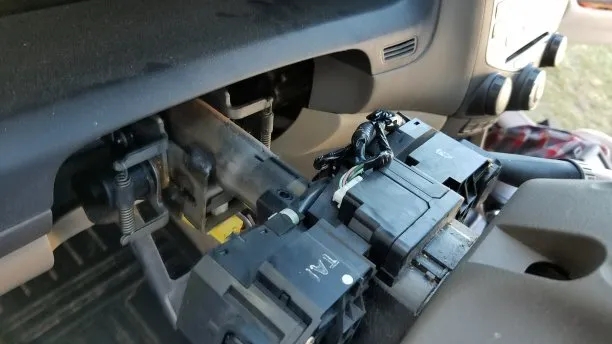 Remove the 2 screws holding the starter switch in place. There is one on the side and one on the bottom. The bottom one is a little tricky to get to, but not too bad.

In the image below, I have removed the entire ignition assembly so that it is easier to see. (You do not need to remove all of this!) The starter switch is the black plastic piece on the far left of the assembly. 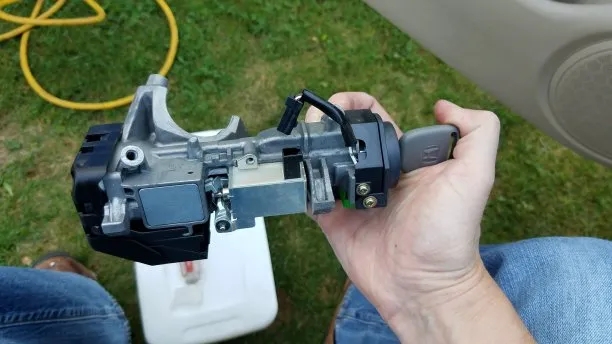 There is an electrical plug going to the switch that should be removed. Unplug it by pressing the tab and pulling it outward, then remove the old switch.

This photo shows the bottom of the starter switch. The gold screw is the bottom one that should be removed. The brown plug has already been disconnected. 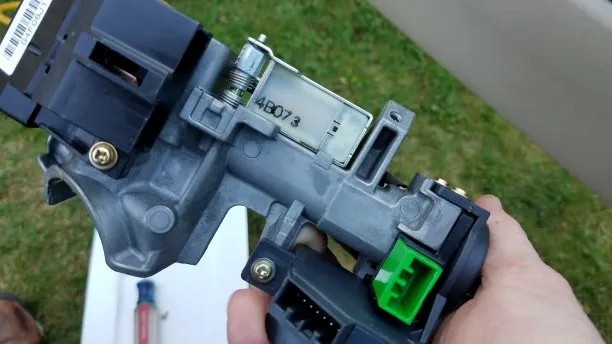 Install the new Honda starter switch in the same place that the old one was by reinstalling the 2 mounting screws and plugging in the brown connector.

Step 6: Put the steering column cover back on.

PracticalMechanic.com - A resource site for maintaining cars, homes and hobbies; striving to be as helpful as possible. Thank you so much for visiting!